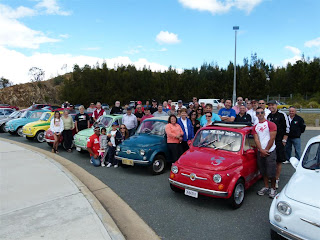 WHAT A WEEKEND!
Saturday, Sunday and Monday the 6th -8th of April, 44 members accompanied their family and participated in the Auto Italia weekend 2013.

26 cars on Saturday morning met at the 7-11 Truck stop at Pheasants Nest, for a 9:00am departure, and what a departure, we created an immediate impact on the Freeway! Passersby, smiling, beeping and so many people taking photos of our magnificent cavalcade. This year 15 Fiat 500's cavalcaded together, each performing remarkably, with a little hiccup requiring special attention and not a major issue! Vince Li Vaccari presented his newly acquired Ferrari 360 Spyder F1. Lovely car Vince, what a sound it made! 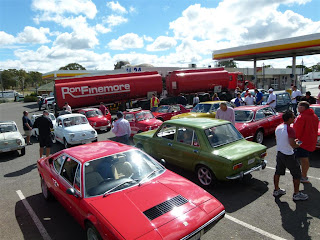 Our first stop was at the McKay VC rest area, where IMSMC provided a complimentary morning tea for all who attended. Mortadella, continental ham, provolone & salami pannini all round! Espresso coffee and an array of cakes provided by our faithful lady members were all consumed with great relish.

All back on track for our rendezvous in Goulburn, for a petrol stop then efficiently bound for the nations capital, where at Weerewa lookout, we were greeted by our friends from the Fiat Club of ACT. Shortly afterwards, in cavalcade to the Italo Australia club in Forrest, where the CEO had arranged complimentary canapes and drinks for all.

Later that afternoon, our committee were guests at the Italian embassy representing our club. We have been complimented in the manner in which we present our club and represent the wonderful machinery that is "ITALIAN MADE". We presented the deputy Ambassador with a club pennant, which he greatly appreciated. 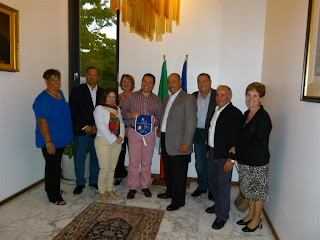 Later Saturday night, members went back to the Italo Australia Club to enjoy a complimentary dinner (provided by IMSMC). A great deal of food, laughter , vino & dancing was the order of the remainder of the evening.

Sunday morning we were met once again by our Fiat Club of ACT friends and were escorted through the streets of Canberra..coffee shop trading ceased as we made our way past. We followed our escorts to the grounds of Old Parliament House, where over 300 Italian Cars of various makes and models were arranged in static display for the public! 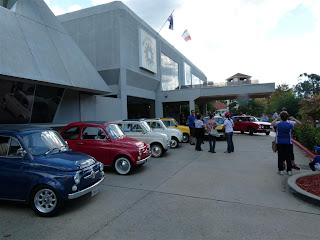 At 2:00pm the presentations for the different classes and winners were announced. 4 of our club members were presented with a trophy, voted as peoples choice, by the Ambassador, including; Best Alfa sedan, best Alfa 105, best Fiat 500 and Best Historic. Well done IMSMC!!! 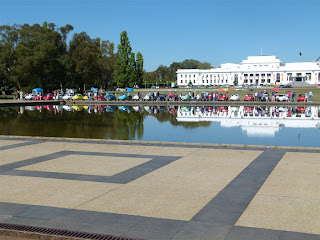 At the conclusion of the display, some members made their way home, while others met back at the Italo Australia Club, where we formed another display at the main entrance of the Italo-Australian club. As we walked into the club foyer, we were greeted by the Italian Club association choir, where they performed both the Australian and Italian National Anthems, commemorating our visit and contribution to Auto Italia 2013. Again we were offered complimentary canapes and drinks for the afternoon. Later that evenning, IMSMC once again provided a complimentary dinner to its members!

Monday morning and our group were bound for home. A few frequent stops along the Federal Hwy, resting our little engines, lunch at Goulburn and bound for a well earnt rest for ourselves and our cars once home. Certainly a memmorable weekend, full of the unexpected but all with positive outcome!

Let's do it all again real soon!