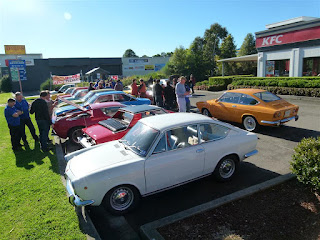 On Sunday the 12th of June, 59 members of IMSMC along with family and friends participated in "Rick & Liana's Run to Berowra".

With great precision, around 20 IMSMC special vehicles met at McDonalds Dural, the convoy of Italian classics then departed at 10:30am after coffee, biscotti and a chat. IMSMC vehicles and their passengers then made their way through Dural, Galston and surrounding suburbs, bound for Berowra!

A special mention to Cos Carbone who braved the morning cold in his recently acquired 1969 Fiat 500 F. A wonderful Car Cos! 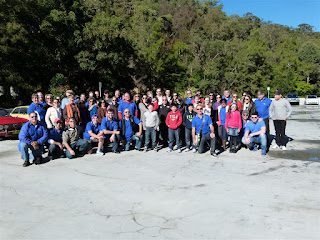 The roads (for many) were reminiscent of a typical country drive, at the base of a snow capped Mountain, somewhere in Italia! We certainly appreciated the demister and natural heat coming from our classic car  heating systems!

With a chill in the air ( approx 13C ) the classics came alive, with keen drivers enjoying the winding country roads! Amazing, considering how close we are to the Sydney Metro. Toward the conclusion of the drive there at the base of Bay Rd, we entered the Berowra car park, it became apparent very quickly that members of IMSMC were getting hungry, but not before a group photo was taken!

The classics were parked, what an amazing sight to have beheld! Group shot taken, we quickly made our way into the Waterview restaurant, to see refuge from the elements and enjoy one another company over some amazing food!

The seafood buffet was fit for kings, Crab, Prawns, Oysters in great quantities and fresh as the sea would allow! There was a great silence over the tables in the Waterfront restaurant as members filed around the buffet, one can only wonder why!

The afternoon evolved with a great deal of noise and laughter, in typical IMSMC fashion! But like all good things, the afternoon came to an end, each driver keen to brave the elements again and make their way home!

A great initiative by Rick & Liana Capolino, who came up with the idea and organised the event for us!
Posted by Alessandro Di Rocco at 10:37 PM No comments: