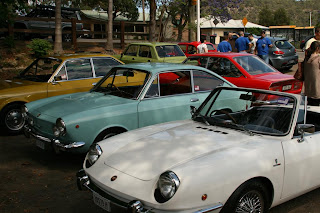 Another exciting IMSMC event took place on the 9th of November, the Tizzana run.
Meeting at the McGraths Hill McDonalds car park, a fine selection of Italian made vehicles made some noise while we waited for all members to arrive. In total 35 people! After greeting each other warmly, we were on our way again, our destination Tizzana winery located near Wisemans Ferry. 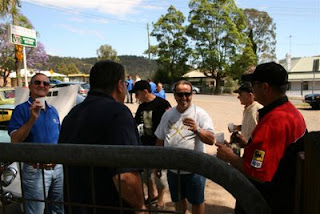 First stop was the pub at Wiseman’s ferry, where we let our cars cool off in the warm weather. Meanwhile the drivers cooled down themselves any which way they could, some with a morning coffee in the shade, others ventured inside the pub to admire the “architecture” and others opting for a glass of famous “shed red”.


We soon departed and followed the Hawkesbury River through to Portland where, much to the amazement of one young driver, we crossed on the ferry! Three ferry loads later we were all across and continued onward to our intended destination, Tizzana.
The road was long, narrow and somewhat arduous at times, but we made it! The last leg leading up to the winery had potholes that according to some members were big enough to lose your car in! 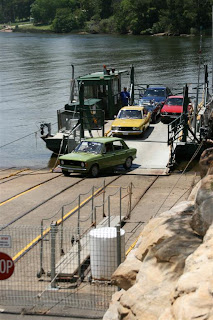 All of a sudden on our left emerged this large sandstone structure some, personally I almost missed it as I was taking in the sights of the vineyards and the river!
The building, which later we found was destroyed by fire was a large sandstone structure built by a Dr. Fiaschi in 1878. Once inside this amazing structure, the temperature dropped easily 15 degrees. After being warmly greeted by the owners we sat down and enjoyed lunch, complimented with a few bottles of the wineries finest and crusty bread rolls. Desert followed apple and rhubarb pie with a dollop of cream.
A brief history lesson followed lunch, with the son of the owner informing us about the history of the winery.

The original owner as before mentioned, was a Dr. Fiashi he was the surgeon general at Royal prince Alfred, he married a “nun” and to get away from the gossip moved away from Sydney and established the Tizzana winery. Fiashi had an interesting career as a young man, serving on the western front, the Italian front and at Gallipoli during ww1. He was in charge of the hospital at Lemnos where many wounded Australian soldiers were treated.

In 1968 the existing owners re-purchased the land surrounding the winery and have now restored the top level into a bed and breakfast.
After the informative speech, members gather around outside for further wine tasting and a club raffle. Where a 1:25 Ferrari 456GT model was drawn by a young visitor Pasquale Romeo, the winning ticket for his dad! 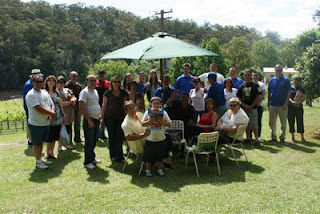 Another successful IMSMC event!
Posted by Alessandro Di Rocco at 5:25 PM No comments: