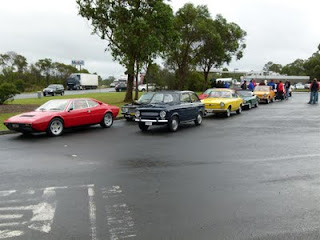 Our next stop was the Goulbourn Bakery.. The cars were filled up with fuel and our members topped up with more food in a very warm and cosy environment. All cars were running nicely, a few minor hiccups were quickly rectified by club mechanics. A special mention to Robert Lecce, Maurizio Puglisi and Nat Stillone in assisting with their expertise. Thank you guys! The second bottle of wine was won by Gerardo Mediati. 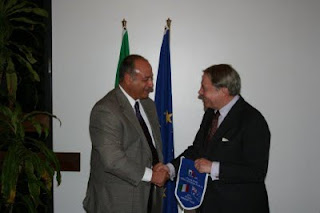 As the 17 cars convoyed toward Canberra via the Federal Highway we waved to the "local staff" hiding in the bushes. Upon arrival in Canberra we booked into our rooms, some members rested, while others made their way to the Italo-Australian Club for refreshments! At 4:30pm, our president John Di Rocco, exited and made his way to meet the Italian Consulate at the Italian Embassy, where John presented the Ambassador Gianludovico De Martino Di Montegiordano, with a club pennant. John also explained the aims and specific objectives of our club, which were received with a great deal of admiration and satisfaction.

The evening saw 35 of our club members and families sitting down for a meal at the Chinese restaurant (up stairs in the Italo Australia Club) were we received copious amounts of food which was enjoyed by all.- Thank you to 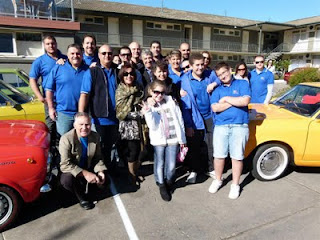 At the conclusion of dinner, new member Lucy Puglisi offered all an after dinner Easter egg, thank you Lucy! Friend of our club Biaggio Lombardi entertained our members with a location joke, with the end result "exploding" in laughter - it involved a serviette and narration - I guess you had to be there!

The next morning we gathered and left for the grounds of Old Parliament house but before departing the third bottle of red wine was won by Giovanni Ciampa. 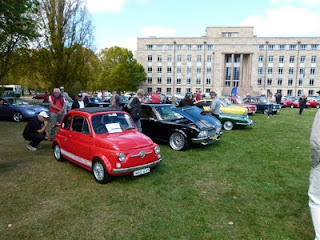 Sunday, approximately 400 cars assembled on the lawns of Old Parliament house. There was everything from Alfa’s to Zagato’s. Our club received 2 prizes, Joe Lecce winning the Best Sedan with his wonderfully restored 1100D Riviera and Francesca Mediati with her Gerardo Mediati prepared series 2 850 sports coupe won the best coupe. Congratulations to you both! Gerardo needed to contend with a series of phone calls - which initially caused "grief" - but all was revealed and sorted!

After the presentations, we were homeward bound. Club mechanics were called upon for minor issues along the way ensuring all cars and members reached their homeward destinations safely..
A very memorable weekend ladies and gentlemen
Bring on AutoItalia 2012.

Posted by Alessandro Di Rocco at 11:33 AM No comments: