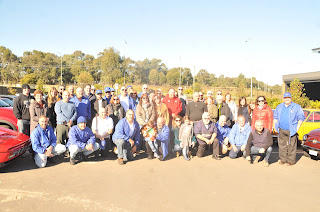 Sunday the 6th of June, 55 members & family assembled 30 cars at the Industrial Harvest in Eastern Creek, for breakfast.

On what was to be the coldest morning so far this winter, many members had arrived early and ordered their breakfast, to be seated in the warmth of this wonderful
venue. 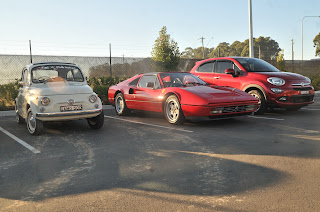 Soon after, the rest of the fraternity arrived seeking the same and were served with passion. 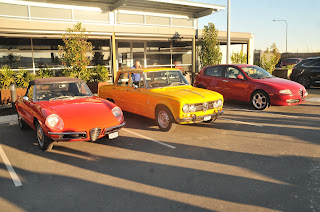 The owners Andrew & Vasili, went above and beyond, making every effort to accommodate each of us. The wait staff were exceptional with their service, courtesies and efficiency,

The hot breakfasts were generous and the coffee's (courtesy of IMSMC) were flowing and HOT!

A wonderful menu with great staff & amenities. One that we will visit again & again! 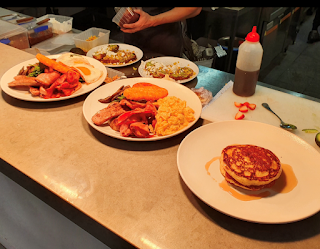 Posted by Alessandro Di Rocco at 7:42 PM No comments: 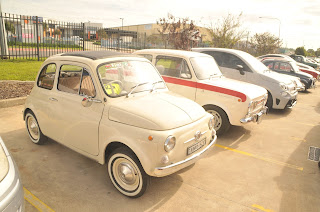 Sunday the 23rd of May, saw 78 members, family and friends, attend Grano Ristorante in Wetherill Park.

It was a lunch gathering, but by 11:30 , close to 30 Italian beauties dominated the carpark. (members & guests must have been hungry!)  Both modern & classic machines filled the carpark  and a few exotics too! The stable was gleaming! 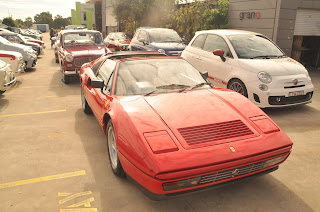 Before long, guests were provided with antipasto platters , entree's and pasta mains judging by the left overs, we can certainly state that we were well catered for! A huge thankyou to the staff of Grano, for a great job!

It was wonderful to welcome so many new members with family. Welcome ladies & gentlemen. 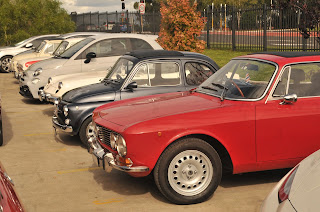 Thanks to Rose Cara, for organising our event and thankyou to all that attended another memorable IMSMC event!
Posted by Alessandro Di Rocco at 7:43 PM No comments: 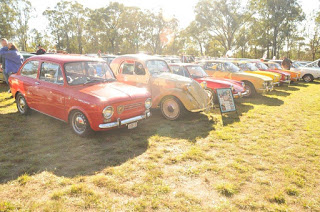 Sunday the 16th of May, We celebrated National Motoring Heritage Day (NMHD) - 2021. 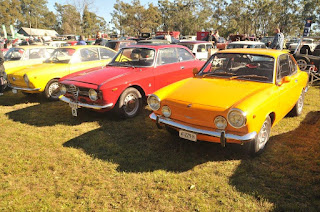 16 of our club cars gathered at East Kurrajong, after a cavalcade through the streets of Macquarie Town - Windsor. Many other IMSMC cars were known to participate in other endorsed event locations, whilst others simply took their cars for a leisurely drive on the day. NMHD was created to highlight makes and models of cars that once graced our roads in years gone by! Our club aim, is to maintain the awareness  that our "Italian Made" cars have made towards the Aussie motoring heritage. At East Kurrajong, our cars were parked amongst many other classics of marques that have made the same contribution. 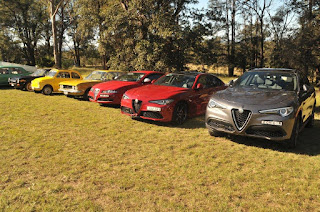 Before long, coffee, cake , homemade pizza and other delights were spread and shared among members and guests, completing a perfect Autumn day. 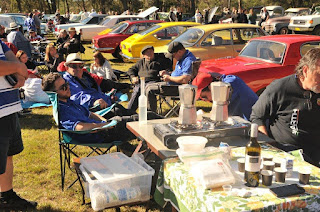 It's great to see and feel the enthusiasm at such a great event!


Posted by Alessandro Di Rocco at 7:24 PM No comments: 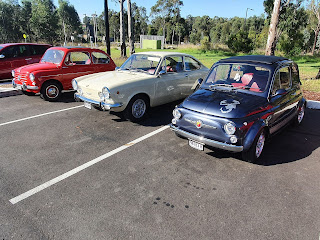 On Sunday the 18th of April, 94 members and friends of IMSMC came together for breakfast at Saluti Cafe. 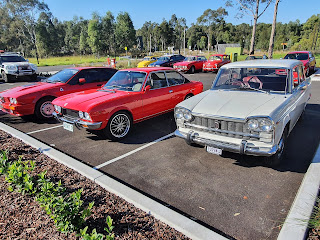 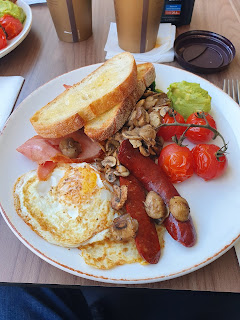 The idea was to start serving breakfast at 8:00am, but upon arrival (at 7:45) the car park had already transformed into a typical Italian piazza - filled with historic & modern Italian machines.

Soon enough everyone moved inside and placed their order - meanwhile in the car park, they kept coming! More Italian classics completed the picture!

As we are accustomed, the morning was filled with discussion and laughter among good friends! As we know Covid limited our events and we're doing our best to catch up in 2021...it's working! 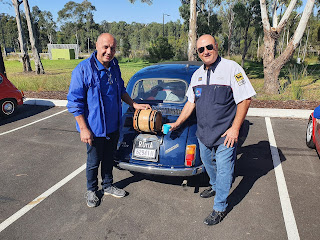 The facilities at Saluti are new and very modern. Conducive to another visit real soon!

Posted by Alessandro Di Rocco at 3:07 PM No comments: 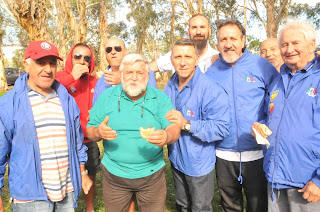 Saturday to Monday, 10-12 of April, our participation in the Auto Italia weekend was a HUGE SUCCESS!

Saturday morning 28x IMSMC vehicles assembled at the Pheasants Nest truck stop, bound for Mackay VC. At Pheasants Nest, Mick Stivala had a slight problem, which almost prevented him bringing his beautifully restored 1970 Alfa Romeo Gulia Super sedan! In comes Tony Albanese stating, "This car will get to Auto Italia even if I have to push it there!" 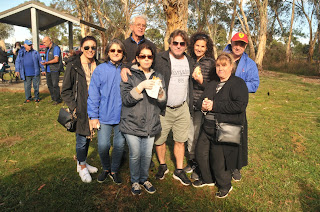 Through sheer determination, both Michael & Tony achieved what they set out to do, the car made it all the way to Auto Italia and Michael received the greatest recognition. His car was voted "Best in class for Alfa sedan." as voted by the judges. It was also in the top 4 finalist cars out of close to 500 cars on display this year!

Charlie Losinno was awarded as a finalist with his 1948 Topolino, coming in the top 9 finalists of the 600 cars on display and recognised as "The best in marque for Fiat 500 class".

Another significant award, was achieved by "Il Presidente" (Gianni Di Rocco) with the Italian ambassador selecting my 1963 850TC Abarth as the car of choice at this year's Auto Italia!

IMSMC is to be congratulated for the calibre of all our cars. The contribution we make to the annual event is greatly appreciated by the organising committee and is deemed as extremely significant to the overall event! 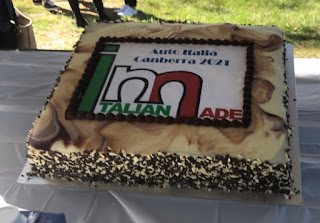 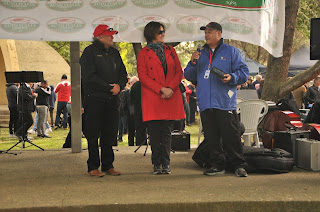 Thankyou to both Frank & Gianni Roccisano of Siderno pasticcieria, for their donation!  Thanks to Vince Calabro for transporting and picking up the food very early in the morning, from Campisi fine food deli. It's so hard to thank everyone.... so THANKYOU ALL!

A further thankyou to all who prepared the morning tea and contributed in the form of anchovies, pickled vegetables, tomatoes. eggplant and all kinds of other homemade, organic and traditional items! (We won't mention the chilli!) 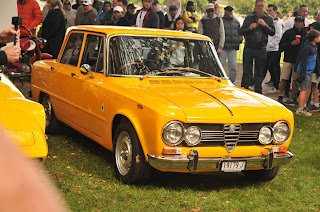 As the weekend unfolded,  our initial assembly of 28 cars, on Saturday, soon became over 35.  By the start of the Sunday event, 60+ members & cars had made an appearance at this year's iconic event, making the trip to Canberra, from all areas of the Sydney metro and beyond. Well done IMSMC! A huge thank you to Cate Stivala, for organising a large group of interested members and friends that visited the National gallery, enjoying the Botticelli to Van Gough exhibition, on Sunday. 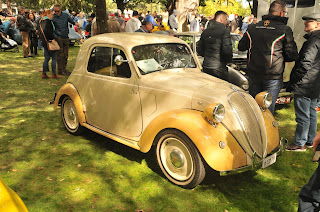 On Monday morning, the remaining members, along with their Italian Machines, lead by member Brad Aitken, made their way from Canberra via Bungendore ( the south side of Lake George). We made our way through to Tarago, onto Bungonia then to Marulan ; 100km of climbing, descent and winding roads. Each car performed at peak levels. A truly memorable experience. 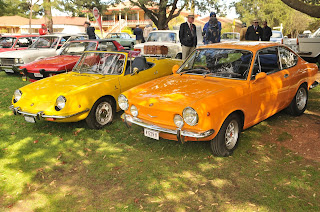 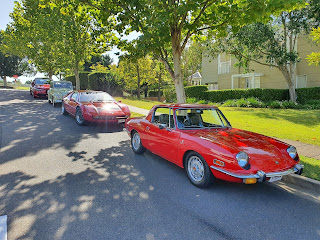 Sunday the 7th of March, in a covid safe environment, 60 members (40 Italian machines) participated in our first breakfast at "IL MAGAZIINO" catered by Dom Panino!

Compliments to our Covid Marshalls that made sure all complied. Thank you to the members that arrived and departed at the times they indicated, as this allowed the "private event" to go forward smoothly, not exceeding safe allowable numbers at any one time in the quadrangle. Alessandro Romeo ( future President) working tirelessly, making sure all guidelines were met! Thanks Alessandro! 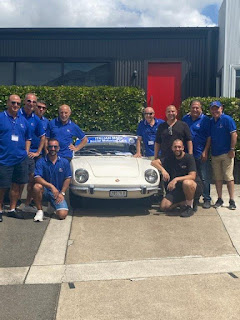 The food was amazing - Thank you to Dom and all the staff of Dom Panino, for cooking and serving gracefully & efficiently. If we were to advertise our favourite panino, we would have to advertise the whole menu! The food was so good, that most remained until the early afternoon and had lunch as well! The streets of Breakfast Point/Mortlake were transformed into the streets of Piacenza, our cars creating the perfect scenery with the backdrop of apartments in the area.

At the conclusion of the day, we had a surprise visitor (on a casual basis) comedian Joe Avati paid us an unexpected visit! See if you can spot him in the group photo... he's the one not wearing the IMSMC shirt! The other guy in black is Dom! Thanks Dom, for a great experience! 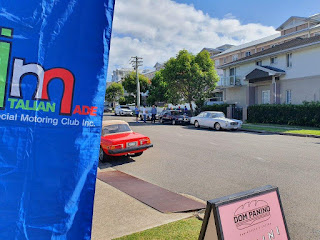 A huge thankyou to Tony Portelli & Rob Losinno for the preparations of "Il Magaziino" and the parking arrangements. Thankyou to Caroline Portelli for her efficient work in distributing the complimentary coffee Vouchers to all IMSMC visitors & participants. On a final note, our compliments and EXTREME Thanks to Emmanuel & Gina Ziino. Thank you for your hospitality and the HUGE SUPPORT you offer our club. Your contributions ( in more ways than one) are extremely significant and greatly appreciated! THANK YOU.

We must do this again! 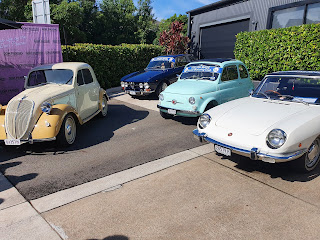 Posted by Alessandro Di Rocco at 6:13 PM No comments: 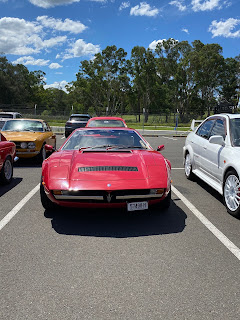 Sunday the 7th of February saw 70 members (well over 100 visitors in total) visit the CSI Club in Schofields to pick up their 2021 IMSMC membership cards. Members began arriving after 2pm and throughout the afternoon we all enjoyed each others company in the refurbished surrounds of the CSI Club.
The car park was transformed into a  piazza environment of Italia with cars from yesterday and today. So much beautiful machinery!

Members were kept busy moving around the venue, visiting fellow members, catching up on the last 12 months. All in a Covid aware and safe manner - Thank you to all for observing the covid restrictions. 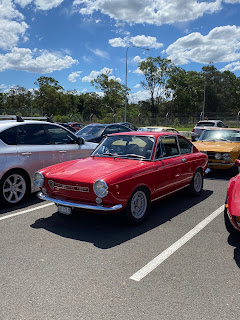 The bistro and bar were kept busy for the entire time and the CSI executive board/committee had a presence throughout the afternoon, doing their best to ensure that every visitors needs were met and realised. Thankyou to them!

We hope to utilise the wonderful facilities at the CSI on future occasions. All the facilities are in place!

See you at the next one! 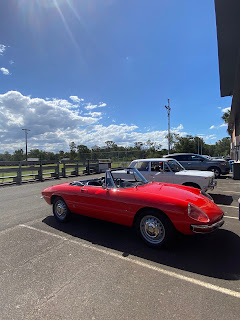 Posted by Alessandro Di Rocco at 6:32 PM No comments: