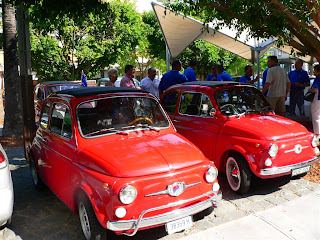 Saturday the 7th of February saw Members of IMSMC join members of the Fiat club of NSW for a breakfast at the Cucina Visconti Homebush Park.

Arriving a around 9am, 17 IMSMC members gathered at the cafe where light conversation was joined in by all. One of the highlight's of the morning was the arrival of a beautifully restored Red Fiat 500 - Giannini 595 driven and owned by Vince Bombardiero and accompanied by his wife. This was the vehicles maiden voyage, the car performed magnificiently non stop from Frenchs Forest to Homebush bay.

The outside temperature was rising steadily, as was our appetite, so it was decided to enter into the cafe. The aromas once inside were nothing short of sensational, This put us in the mood for greater things to come. Once settled in the menus were handed out.

As we waited for our breakfast orders to arrive we looked out through the glass facade where our vehicles in their resplendent colours were located in the carpark it looked like a scene in Italy, the cars were parked on the side of the road, on the curb, some half on half off, just parked as close to the cafe as possible and the small bocce court complimented the scene.

The temperature outside continued to climb steadily, however indoors it was rather comfortable. The cafe included a store where many boutique goods such as imported wines, cheese, oil, pasta, biscuits, herbs and spices could 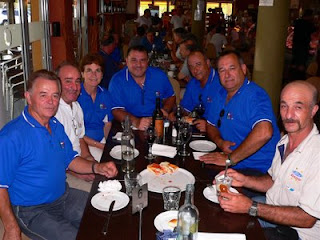 We even noted some aftershave and toiletries.. Any one for some Pino Silvestri?
A bakery is also part of the cafe which supplies not only good wholesome crusty bread but cakes and pizza.

The most popular breakfast was the emperors breakfast, bacon eggs and Italian sausage. Others enjoyed other items but one different Breakfast was the Sicilian granita(shaved flavoured ice) and a large plain brioscia a very nice type of sweet bread.

Another table enjoyed not only a good breakfast but at approximately 11.30 a large piping hot freshly made pizza covered in tomato sauce, mozzarella cheese and basil appeared and was 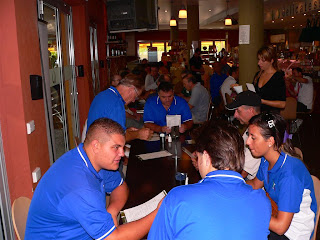 The morning went quickly and as usual all good things come to an end. Outside the temperature had reached around 40 degrees! We all said our goodbyes and proceeded to drive home. As we started to leave the owners of cafe Visconti thanked us for attending and invited us back for a game of bocce, now that is different!

Another excellent event enjoyed by all.
Posted by Alessandro Di Rocco at 3:30 PM